iSoftBet is known for its intriguing slot releases, and the Wild Hammer Megaways slot is another worthwhile title. Released in late July 2021, this release uses Big Time Gaming's Megaways mechanism to help the wins roll in. It's a high variance slot with an RTP (return to player) of 95.78%. But thanks to its electrified win features, you can earn up to 50,000x your bet during the base game and the free spins feature.

True to iSoftBet's designing prowess, this slot's visuals are nothing short of amazing. The slot has a Norse theme that's brought out in the HD graphics. You'll get a glimpse of a docked Viking ship on the open waters of a mountain area as you wait for the game to load. Some of the game's highest paying features then get displayed, so you know what to expect. You can then proceed to the gaming screen, where the reels lay against the entrance to a building with guardian sculptures on the right and left.

Thanks to the Megaways feature, you won't see a typical reel grid. Six reels that can hold up to six symbols each spinning vertically. However, there's also one reel at the top, called the Tracker Reel, with symbols spinning horizontally. As such, players get an additional symbol on reels 2-5. Although it may seem a bit confusing during a spin, the wins still get counted from left to right once the reels stop.

iSoftBet keeps things simple by only having ten regular symbols on the reels. The low paying ones are playing card values written in an archaic font. For high paying symbols, you have five Norse mythology characters. These are Odin, Thor, Fenrir, Loki, and Freya.

There's also a hammer wild, Mjölnir, for substitutions and a bonus shield symbol to trigger the Free Spins feature. 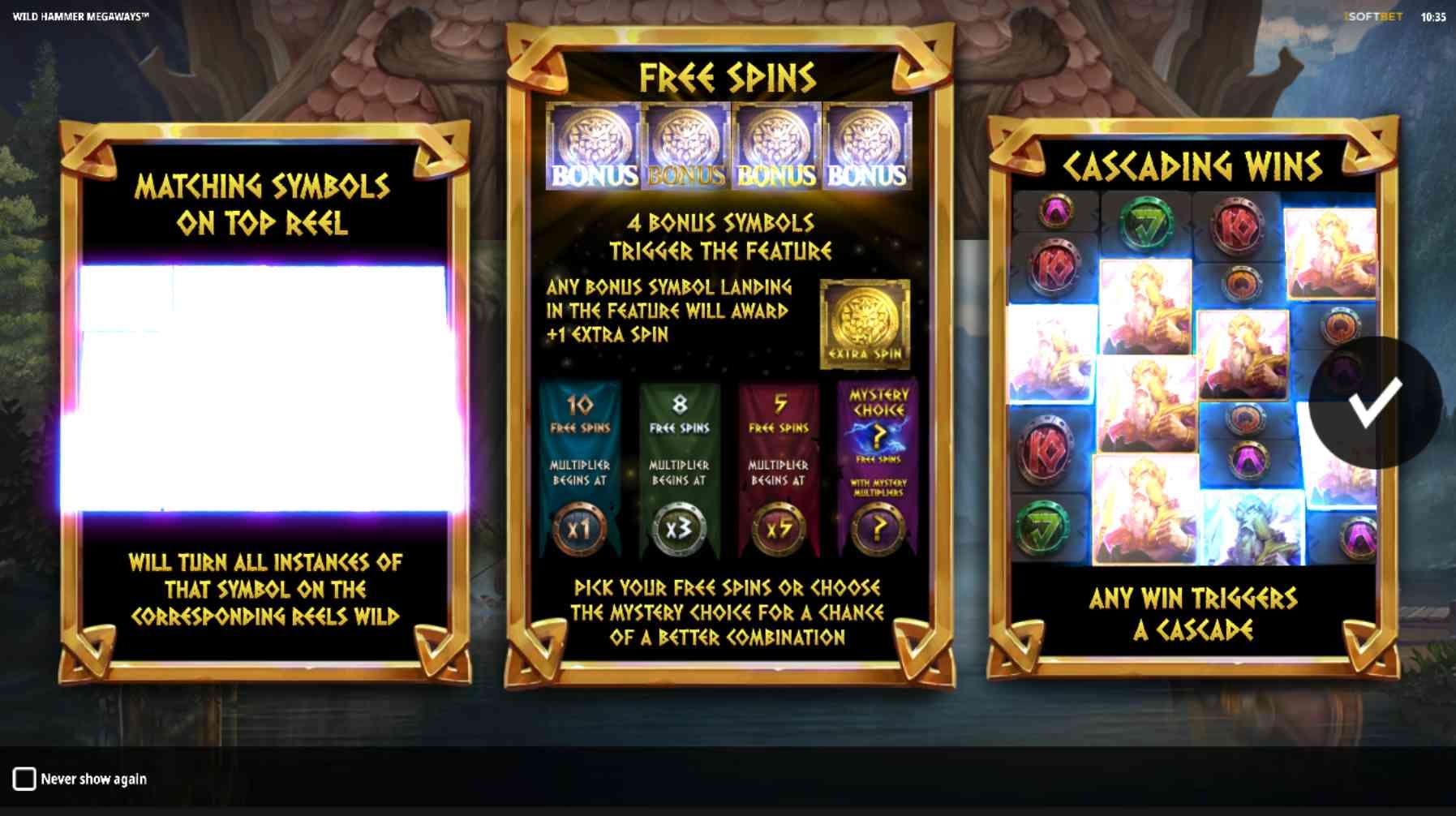 For some visual excitement, wait until you start landing wins. The winning symbols don't animate. However, their frames get shot by lightning before the symbols explode like shattered glass to leave empty spaces.

More symbols drop from the top to fill them in from the empty spaces left after a win. So you can get more than one win in a single spin. The feature continues until no more wins fall into place. That's a big consolation for players that aren't fond of high variance slots since one winning spin can pay quite a bit.

After a spin, keep your eyes on the top reel. That's because landing two of a kind automatically turns those, plus any other appearance of that symbol, on those reels wild in an electrifying display.

Wild Hammer Megaways also has a Free Spins round that you can trigger whenever four Bonus symbols land on the reels. You'll then get to choose how many free spins you'd like as well as the multiplier value in play. There's also a mystery choice, which is similar to a gamble on the feature. The game will randomly choose free spins and multiplier values for you.

In addition, you get one additional free spin every time you land a bonus symbol on the reels during the free spins feature.

During Free Spins, Cascading Wins trigger an unlimited multiplier counter. Any cascades help the multiplier value increase by one for the entire feature.

During the month of July, iSoftBet also released titles like Pyramid Pays and Legend of the Four Beasts, both of which have 243 ways to win. There was also Ancients of Korea, which has 4096 ways to win. But the year isn't over yet for this developer. iSoftBet fans can look forward to at least six more video slot releases between August and September of this year.